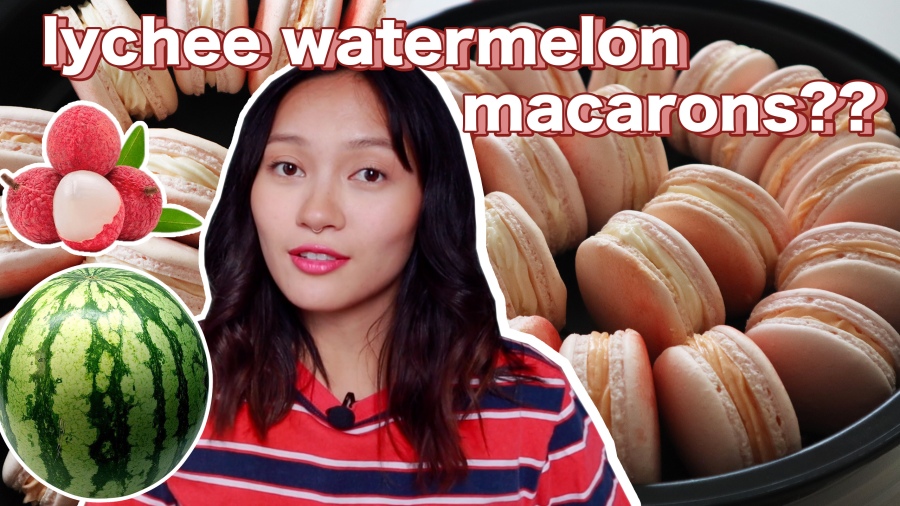 Watermelon is the fruit of the summer. You cannot go to one picnic or family gathering and not find a big bowl of this juicy fruit. Another fruit that is nice and ripe in the summer is lychee (pronunciation: lee-chee or lie-chee? I always said lie-chee growing up, but always heard lee-chee outside of my home). When my future brother-in-law asked me to make him macarons for his birthday in July I couldn’t resist — especially because I’ve known him since he was a little 12 year old and because I consider him my own brother now. His only specific request was that I make it in a cool and unique flavour — so naturally I thought of the two big bowls of juicy fruits sitting in my fridge. Watermelon and lychee… but not together in the same macaron. I was just going to make both flavours in a macaron shell of their own.

I used the macaron shell recipe from the raspberry mango macarons I made last year. This is the macaron recipe I’ve been making for years now and it never fails me. Since I was experimenting with these macaron flavours, I decided to also experiment with the recipe and I attempted to change the meringue from an Italian meringue to a french meringue just to see if it was easier or faster in anyway. I ended up ruining the macarons because I had over-mixed, which resulted in cracked shells that were missing the little signature feet. I found that mixing it was way harder using this method, so I just decided to scrap those shells and stick to my Italian meringue method since it seemed to be foolproof.

My game plan to turn lychee and watermelon into a macaron flavour was to create a concentrate from watermelon and lychee juice, incorporate that into my Italian meringue buttercream, and then also create a gelée centre of watermelon, and lychee jelly, which I felt would be a little risky since macarons are extremely sensitive to water and humidity. The end result was still super delicious, although storage is very important because of how delicate these little macs are, so do not forget to store them in an airtight container and freeze them when you plan on storing them (if you don’t finish them all in one sitting).

So here is the recipe for the macaron shells here, the buttercream, and the gelée below.

This recipe makes enough to fill 35 macarons as made in the macaron recipe above.

Method
For the concentrates

1. In two separate small saucepans, add the lychee juice and sugar to one, and the watermelon juice and sugar to the other. Bring both pots to a boil and lower heat to a keep at a simmer for about 30 min or until the juice has turned into a thick syrup. Take off heat and let cool completely before using.

Feel free to watch the video tutorial below!