You’ve probably heard about the viral coffee trend where people are taking instant coffee, sugar, and hot water in order to create this amazing frothy, fluffy, meringue-like coffee goodness. Then using it to top iced milk, and drinking it, as an elevated iced coffee drink. I think the reason it is so popular is because it only contains three ingredients, which are all usually found in most people’s pantries. It’s super accessible, and easy to make, which all attributes to its popularity. Not only is it easily accessible, and easy to make, but it is also extremely delicious. I have been trying this out, along with my family members who are slightly addicted. I’ve gotten messages from friends asking if I’ve made it, and if I’ve done anything different to it, and it got me thinking… Could dalgona coffee be used as a dessert topper instead of a beverage topper? 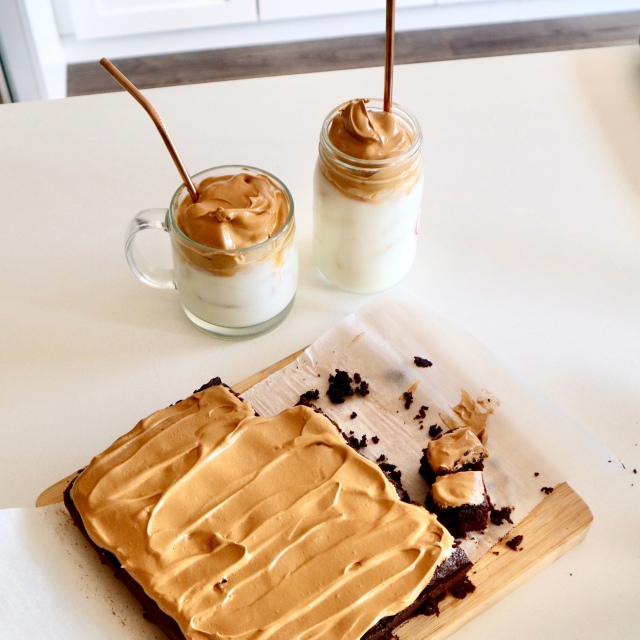 I decided to put it to the test, mostly because I’m home in a full house and I’ve been wanting to do some dessert testing, and baking experiments, and I figured that brownies is something I could easily put together between meal times. This allows me to get my baking and filming done without having everyone come in to disturb my creative process (by adding dishes to the sink, distracting me, or just by making messes in the kitchen while I work). I’m slowly losing my mind, I don’t know if you can tell. Brownies are a quick dessert, while coffee and chocolate are always a great combination, so I decided it would be perfect altogether. I love drinking coffee while eating sweet treats, so why not combine the two?

I wanted to experiment with this brownie a little, adding things I wouldn’t normally add to a brownie, such as walnuts, coconut, and almond flour, but I also wanted to see how the texture and flavours would be with these additions. The almond flour actually makes the brownie quite fluffy and tender, so if you prefer to have a chewier type of brownie I would suggest omitting the almond flour and just sticking to all-purpose flour. The additions of the walnuts adds a nice crunch to the brownie and a slight nuttiness, while the coconut and milk chocolate chips just add a nice sweetness and gooey-ness to the brownie.

I tried to choose flavours that I really enjoy with coffee. For example, I chose walnuts and coconut because I love the flavour of coffee and coconut milk, and I think the nuttiness of walnuts pair extremely well with coffee. This combination oddly makes me think of breakfast… and dessert dates. I really miss dessert dates in other bakeries. I added in the milk chocolate chips because I didn’t want this brownie to be too bitter or too cocoa-y and I figured the sweetness of milk chocolate chips would help to contribute to a softer and more balanced palate. 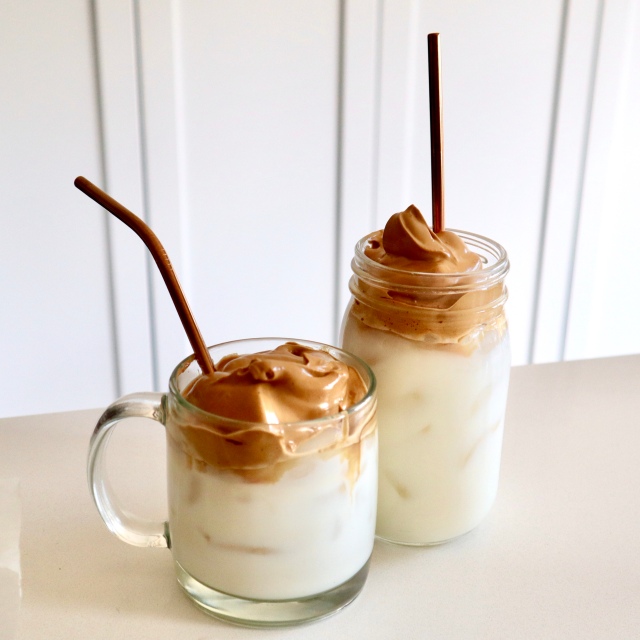 Let’s talk about the coffee. It’s a great drink because it’s bitter, with a little bit of sweetness from the sugar, but it’s ultimately diluted down and mellowed out by the iced milk. I find that when used as a dessert topper, it should be used sparingly because of it’s bitterness, but it works wonders on sweet desserts because the bitterness of the coffee really cuts through the sweetness of the dessert on the first bite — almost like a little punch of bitter in your mouth, but quickly mellowed out by the brownie. I find this pairing works amazingly and I really enjoy the flavour pairings.

I’ve also been baking whenever I can, because I find comfort in eating cookies and brownies, especially during hard times like these when I’m not able to see my fiancé and friends. I’m eagerly awaiting the days we’re allowed to go out and live our lives again, but in the meantime I’ll just keep posting these delicious easy dessert recipes. Hope you’re all staying safe and SANE! (My new favourite and super relevant saying).

Here is the recipe and video below.

Ingredients
For the Brownie:

*Note, any of these three can be omitted or substituted for 3/4 cup of any inclusion of your choice