It has been about six months since I went on my fabulous foodie trip to New York City with my fiancé and best friends, and yet no matter how much time has passed, I am still dreaming about Magnolia Bakery’s Banana Pudding. I keep seeing photos of this luscious pudding when I scroll down instagram, and it keeps triggering cravings I didn’t know I could have. It seems that now it’s not easily accessible, I want it more now than ever.

So ultimately I decided to try and recreate it, like I do with every food item I seriously crave and can’t get my hands on. I figured that they used a base pudding, similar to crème diplomat, or pastry cream lightened with whipped cream, fresh banana slices were definitely present, and easily accessible. All that was left was the cookie base. After a little research, I found out that the cookie the bakery uses, is a light and airy cookie called “Nilla Wafers”. They’re super popular in the US, and often used for pie crusts and puddings, so I figured it wouldn’t be too hard to find. 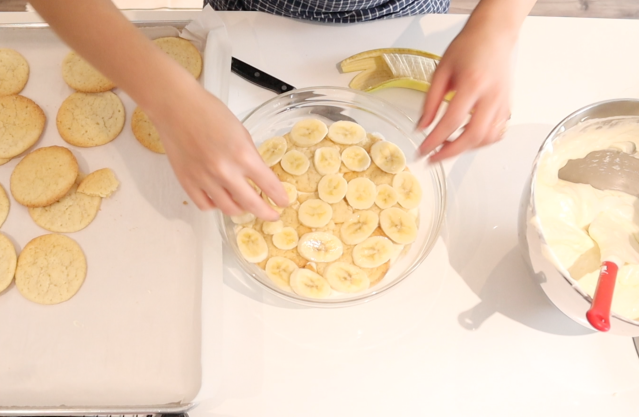 I went over to my local grocery stores, and couldn’t find them anywhere. So I decided to try to create a cookie that would be similar enough to replace the Nilla Wafers. I did more research and concluded that my cookies should be firm, crisp, tender, sweet, and full of vanilla flavour. I decided to create a cookie similar to a sugar cookie but with less chew and more of a short gluten strand texture, similar to a shortbread cookie.

I found that these cookies were really crisp when initially added, creating a great level of texture. Over a few hours, the cookies become slightly more chewy and soft after absorbing the moisture in the pudding, which I actually prefer over the crisp cookies, so I would definitely recommend waiting a little while after assembling to let all the flavours meld together.

Here is the recipe and the video tutorial below.

This recipe makes about 8 cups of banana pudding.

Ingredients
For the pastry cream (custard)

For the “Nilla Wafers”
Ingredients

Method
For the Pudding Base

Method
For the Wafers

To assemble the pudding, I used about 2 large ripe bananas, thinly sliced.